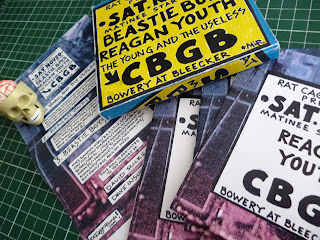 A little more than a decade ago my friend Raf visited Donna Lee Parsons a.k.a Daze in Switzerland where she had relocated, and somehow showed her the Ratcage Records mock logo I had designed on one of my early releases on Ratbone Records. She wrote a very nice email out of the blue saying she loved the tribute, and that's how we started corresponding with each other, eventually swapping a few records and emails until she passed away in 2003 from cancer. Before she underwent gender surgery in the early '00s, Daze was better known as Dave, former head of the legendary New York label (and former store) Ratcage Records and editor of Mouth Of The Rat zine as early as the late '70s. He released a few incredible and timeless records, some of which really had an impact on me growing up – Agnostic Front Victim In Pain LP, Beastie Boys Pollywog Stew 7", Rattus s/t LP, Neos Hassibah Gets The Martian Brain Squeeze 7"… He was also a talented artist and designer, whose most famous piece of art must be the legendary cover for the Bad Brains cassette album on ROIR! Yes, that was him/her behind the Mir* avatar too! 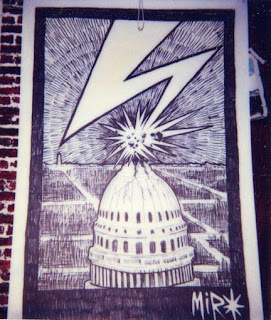 In 2002 Daze released this limited edition handmade CDR boxset, the recording of a show (s)he booked at CBGB back in November 1982 starring Reagan Youth, (hardcore era) Beastie Boys, and The Young And The Useless (featuring Beastie Boys' own Adam Horovitz). A raw documentation of the show, as depicted in the liner notes: "We have edited out nothing from the three sets, nor have we re-equalized, compressed, added reverb, or reprocessed these original recordings in any way. We taped the mix directly from the soundboard: the listener hears the signal exactly as it went to the CBGB PA system that afternoon." In that spirit, I ripped the CDs the way they were done: one long track for each band. I included a text file with tracklist info in the folder though.