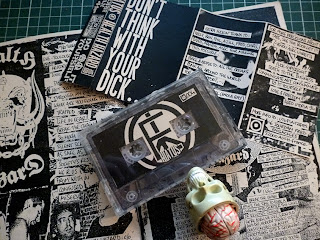 Two of the most popular '90s "Euro crust" bands gathered on one tape, both recorded live in the South-West of France in 1993-94 and released by Utopia Tapes, a cassette label run by Fred a.k.a "Tony", also drummer for Enola Gay, Vomit Yourself, and Disbeer. I got the opportunity to see both bands on stage at the time and they were super solid, as those recordings can attest. The Hiatus side was recorded in Auch on August 17th 1993 and the sound quality is excellent. Soundboard recording. I really had a soft spot for this band, they always killed it live and were our own French-speaking, heavy drinking, continental answer to Doom. Talking of which, the tape ends with Hiatus' hilarious studio rendition of Doom's "Relief" taken from the split 7" shared by both bands. The Health Hazard side has a much rougher audience recording (Toulouse on February 22nd 1994) but is still totally listenable. The UK band logo was (and still is) on a lot of patches and shirts, for good reason. Blazing fast thrash/crust with raging female vocals. Ex and future members of just about every band in the UK ever, an attempt at a family tree would give even the most die-hard genealogist a headache within minutes. There's also the Not Just A Nightmare EP as bonus material to top it all off. The tape came with a really cool booklet featuring lyrics, pictures, collages… They don't make them like this anymore. 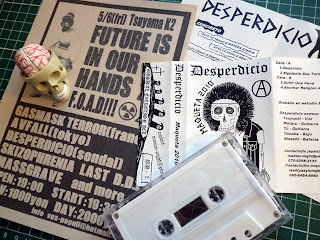 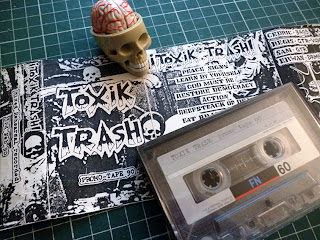 Toxik Trash was a late '80s thrash/grindcore band from Brittany that released a couple of tapes and, if memory serves right, had a song on one of the later 1984 compilation LP series on New Wave Records. By the time this (third?) demo came out, it seems they were already heading for a more death metal sound, but I don't think any recording from that era exists. Nothing groundbreaking on this 12 song effort, but there were so few bands playing that style in France at the time that it deserves to be documented, I guess. 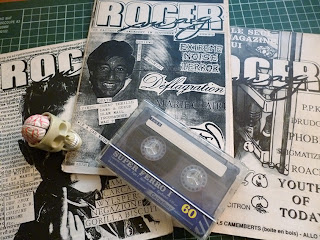 This is a 1988 radio show by one of my earliest pen pals, Laurent of the infamous Roger Mag (who might be better known by internerds as the main man behind the Church Of Zer music blog) back when he was still living in France. The hilarious and totally absurd chit-chat is in French but non-French speakers may enjoy the excellent set list.