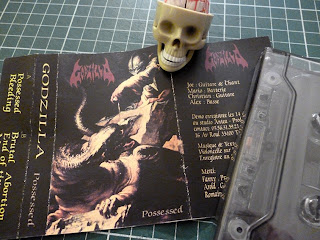 Some of you might have heard of the French metal band Gojira, who are well established in mainstream metal circles now. Not my thing at all, but they started out as a pretty good straight up death metal band. They released a couple of demos under the Godzilla monicker before changing it to Gojira (which is the Japanese name for Godzilla, as you may know). Being from the same area, I got to know and see them early on. I was mightily impressed, they were so young yet so tight and creative — especially coming from a rural area that was not exactly a fertile ground for metal. "Possessed" is their second demo tape and you can guess Morbid Angel and "Human"-era Death were major influences at the time. The drummer Mario was about 15 when this was recorded, was self taught and had only been playing for a couple of years. No wonder he's such a beast now.

I just saw on their Discogs page that this demo was reissued on CD a decade ago. Oh well. This is taken from the actual demo tape. I will most likely post the first demo in the future.